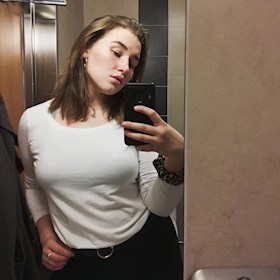 It’s been a long time since I last wrote and honestly I’ve been contemplating whether or not I should continue blogging. For a while there, I felt really lonely after moving, filled with anxiety and for the most part – just like a huge failure.

After weeks of coping with loneliness I finally found a place within myself and in this world where everything wasn’t awful. I started working out, hanging out with friends, working a lot and actually not finding motivation to study. But that’s life, everything can’t be right with the world at all times. Last week my school decided to stop the distancing. I got back to school and the days as I knew them got ripped away.

This week, was in one word – horrible. My routine was taken away from me as well as the 2 weeks of holiday in July we were promised (when I was supposed to go visit my boyfriend) and at the end of the week I got awfully ill. For two days (almost 3 now) I’ve been bed ridden asking my body not cough because it just hurts so much every time. Later tonight my mom is coming to test me so I don’t have to go to the clinic tomorrow and accidentally faint on the sidewalk on the way over there.

I have this internal fear or anxiety that physically stops me from doing anything important right now. I almost did not apply for my social security contribution last week. The fear is based upon my employability – or rather the lack of it. When I got back from Italy last year it literally took me one day to get a job and I got hired on the spot. Other than last fall, I have never really dealt with unemployment and in the beginning of August last year I wasn’t even worried. I was looking forward to a few weeks of unemployment because I hadn’t had vacation in a really long time. But now, having gone through half a year of looking for a job – I am so scared of not getting hired at the end of this education to a state where I am paralyzed.

This year is so important and puts a ton of pressure on me, to the point of where I just can’t deal with it and procrastinates times infinity. I am literally so scared of failing at the end of all of this that I am scared of doing just about anything – even things that logically would stop me from failing.

We often talk about the hunted animal having two options – to fight or flight. But there is third, more common response to being or feeling hunted – playing dead (freezing). A response I’ve had since forever, whether it was my ex boyfriend mistreating me or an assignment that gave me a lot anxiety. I just play dead.

I think a job in the industry would really suit me because I am drawn to routines. Whenever my routine is taken from me, I play dead – until I’ve had the chance to make a schedule that works for me. I haven’t had that chance yet. The information in my school is different from day to day. Tomorrow school might start half an hour earlier, but no one really knows because they only told 2 students. The stress of not knowing what tomorrow might look like shouldn’t be there – not in a school where focus should be the education.

Anyhow, next post will be on a happier note.